Sardinia, in the middle of the Mediterranean sea, is bustling with ideas and passion when it comes to digital innovation. From social and sustainable innovations to the sharing economy, digital school or high-tech medicine, it is worth taking a deeper look at what is going on there and connecting with its players.

I’ve had the opportunity and pleasure to interview 5 of its players in a series dedicated to Digital Innovation in Sardinia.

In this interview, we meet Roberto Spano, CEO of Sardex, a local currency launched in 2010, now aggregating more than 2000 members with more than 50 Million euros in transactions realised, and one of three pilot projects in Europe on this front.

The interview is available in video format below or on YouTube and the full text transcript is below, translated in English.

Youmna Ovazza : Hello, I’m with Roberto Spano, and we are going to talk together about digital innovation in Sardinia. Roberto, thank you very much for giving me this interview, before asking you a few questions, I will let you present yourself first.

Roberto Spano : I am the CEO of Sardex, a multilateral clearing system who uses a complementary currency.

YO : First question : How would you qualify digital innovation in Sardinia ? For you, today, what does it encompass ?

RS: Digital innovation in Sardinia today, is a process that began several years ago, with first the digitalization of newspapers, Internet access to free online content, and today has become a widespread network of people, technologies and systems collaborating easily within the borders of the technological development available today.

YO : Are there any technological trends in the world that do no exist yet in Sardinia, or would you say that the same is happening as elsewhere ?

RS : We say, among CRS4, that new startups are quite in line with international developments. As for us personally, and digital money, compensation systems are considered to be one of the current frontiers.

YO : Who are the major players in digital innovation in Sardinia ? Are they private, public, who are the institutions or companies who drive innovation ?

RS : It is probably the private sector that is the most active, be it in quantity or in quality. There are many companies and also many individual personalities, even a lot of youngsters, who are particularly active. Public administration is looking for ways to support this movement, this bubbling situation, with mixed results. They are struggling a little bit to keep up with this movement that is really taking place here.

YO : What is the role played by associations, for instance, or by Europe, are they players in this movement or not ?

RS : There are several associations, maybe my friend Nicola will talk about them, who are particularly active in stimulating and spreading technological innovation stakes and issues, above all I would say, in traditional productions. And Europe is playing an interesting role because, for example, many projects are certainly interesting and may have interesting developments. For example, we participate in a project called « Digipay4growth », which is a project involving 6 countries that aims to study and, say, test payment systems that involve also public administration.

There are 3 pilot projects in Europe, within this frame, one in England, one in Catalonia and one here in Sardinia. And the progress made makes me hope the results achieved will spread in the rest of Europe.

YO : You’re making the transition for me, would you describe your activity to us, what is it that you do, and with whom do you work ?

RS : Yes, we started here in Sardinia, in the heart of the Cagliari land, in 2010, now we’re almost 6 years-old, and we have started involving business owners little by little, now they have become 2700. 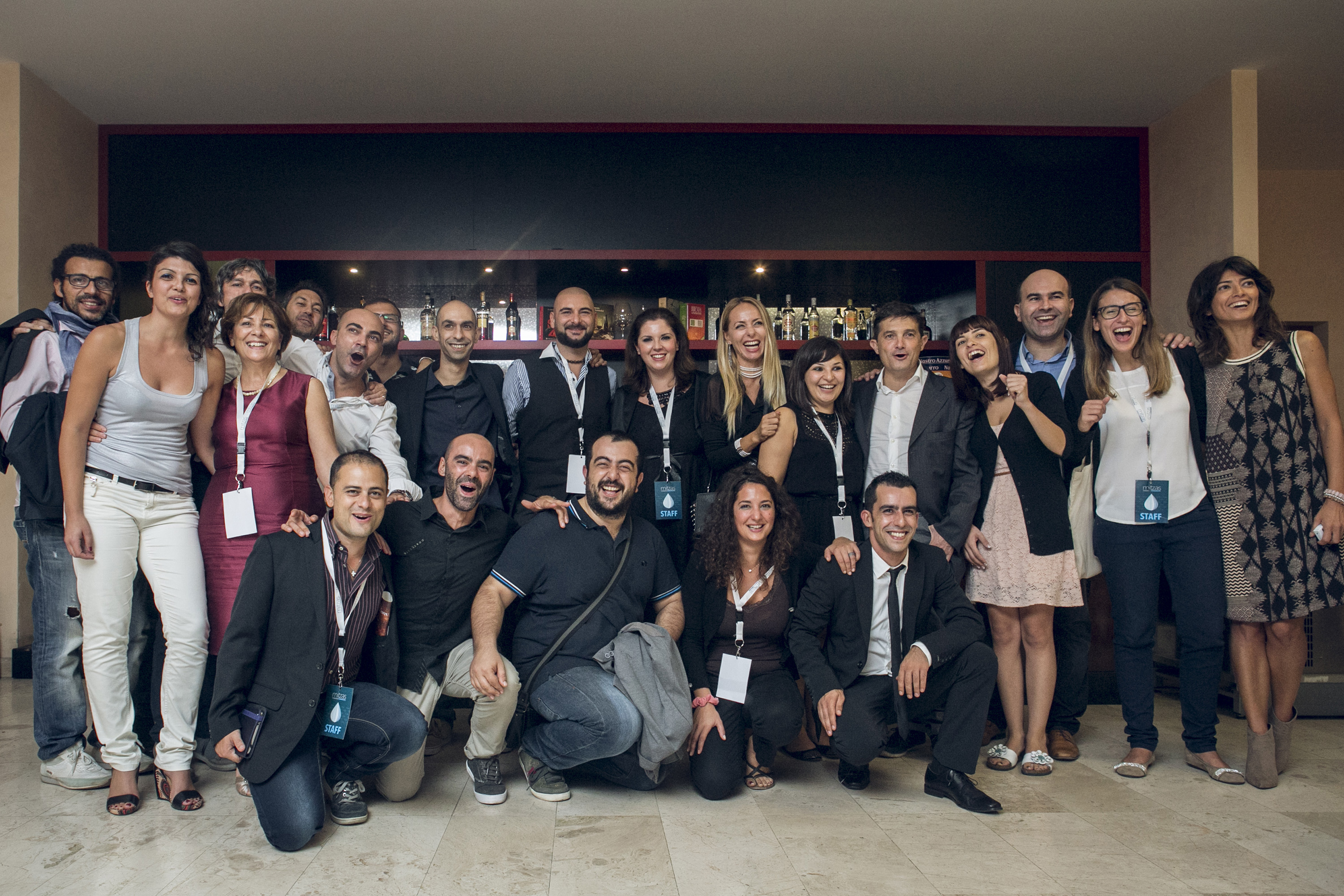 They exchange among themselves their unused production capabilities, not using the Euro but using Sardex, a complementary currency which is a mechanism aimed at facilitating trade. 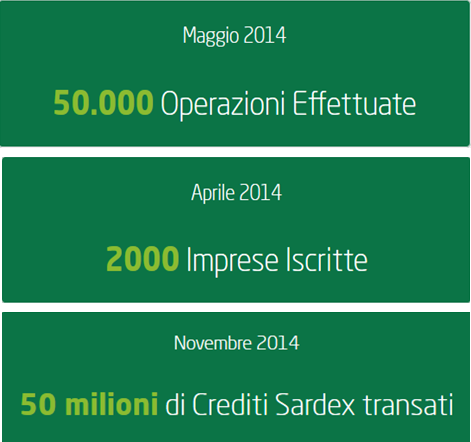 What is being shared would never have been possible in Euros, therefore I would say the technology, the network and the trust we are putting in the system are allowing the occurrence of this.

We’re also starting to work with the rest of Italy, we have 8 other circuits in 8 other regions, and the objective is to use these systems to strengthen local economies.

YO : I have several questions. Are the companies using your currency only Italian, or are they working with foreign ones ?

RS : For now, let’s say our focus on the local economy is confined to Italian regions. We have many exchanges with other nations, in particular we were in France, in Paris, and we brought our experience to the Inter-Ministerial Commission which deals precisely with this subject matter, and which has recently released its report precisely in France.

YO : And why did you say that the payments that occurred with your currency couldn’t have happened with Euros ?

RS : Because they are charged extra, these are precisely the empty tables in a restaurant, or clothing that could not be sold, a tailor paid in credit, because in Euros nobody goes to sit at that table or none requires that dress because liquidity is missing.

YO : And so you can be at the heart of certain innovations that can arise ? Because, if you allow me, I wanted here to connect with Jugaad Innovation, or frugal innovation, let me explain myself : the idea I had, and you will make the connection, is that in Sardinia, there is a lot of inventiveness, a lot of ideas, with few resources. And I asked myself: is digital innovation arising in the same way? Because there is much talk of Jugaad innovation in the world, a lot in India but also in other countries, are there things in Sardinia that are happening along this frame? And is your currency, for instance, allowing for the emergence of such innovations? I do not know if I’m clear?

RS : Yes I think so. You can certainly make a parallel between the use of technology, the use of complementary payment systems, and the economy that needs to waste less, produce less waste, consume less energy. And the answer is yes absolutely, for several reasons. First of all technology, well used, can actually allow for savings, which can ultimately result in a better quality of life, that is getting what you need with less expenditures.

Then there is certainly another thing that is very important, and that is there are many ways to grow up; until now we’ve been taught that a company, to grow up, to be able to go abroad, had to have many branches , lots of employees, it was a kind of search for gigantism. But gigantism in effect, in nature, is a sickness, there are ways to become strong enough to tackle national and even international markets. Then the network, the connection between businesses, the use of technology as an increment to collective intelligence, are certainly a way that belongs to us more, and that is probably the better path in terms of resource consumption in general.

YO : Could you name 2 or 3 initiatives or examples of digital innovation, people who are working with you or not, that you find are very interesting here in Sardinia ?

RS : There are, for example, initiatives in transport, therefore, electric transport, including transport of proximity, local items that use electric vehicles. And if we consider technology as a means to reach quickly to one’s clients thanks to geolocation for example, there are definitely such cases.

Then there are content management systems, initiatives aiming to put in relation small tour operators, so as to allow them to accommodate tourists coming from abroad in more interesting ways. They’re also building portals that facilitate the connection between these operators who could never have afforded to build it by investing on their own.

Then there are a whole set of more technological initiatives by companies that adhere to our circuit, each working in a specific field, for example in chip production, that are getting benefit from the network connection to reach sustainability more easily.

RS : I don’t think you can put a demarcation line. Surely there are many traditional activities, for example in the field of textiles, in primary production, in craftsmanship, that will manage to remain alive thanks to digital. I refer for example to the union of craft products with 3D printing. And maybe some of these objects will be lost without digital, be it the capacity to produce them or even the memory of their existence. But there will probably be also a lot of new activities, new crafts, that will appear and arise thanks to digital.

YO : Is Sardinia different in that from the rest of Italy, and how ?

RS : We like to say that we are different. We’re an island, we have the sea all around us, we don’t want to argue with anyone, therefore we’re convinced we’re different, we have a literature that belongs to us.

RS : Digital innovation is interesting when you have 300 km of water to cross. Then, exporting brainpower costs much less and is much less blocked by transportation costs. I hope and I think and I firmly believe that digital will allow for exchanges that until now have been too few or even non-existent. I refer to the Northern part of the Mediterranean.

Our idea is to create here a meeting point between the European initiatives and the Mediterranean basin. This, we say, is our hope.

YO: What are your sources of inspiration in other countries? Are they countries, in the way they develop digital innovation? Are they cities? Are they businesses, movements? Can you name 2 or 3 examples that inspire you most?

RS : Regarding Sardex, there were certainly 2 events that were very important. For sure, a careful study of the proposal of Keynes from 1943 at Bretton Woods that advocated an exchange between nations, not through currencies but through compensation systems. We have somehow tried to bring back this mechanism between enterprises.

And then, for sure, WIR in Switzerland, who exist since 1934 and which is the most important compensation system in the world, as a complementary currency, the WIR itself. It has become a bank, but it remains a source of inspiration as after all these years, since 1934 till now, it continues to exist with more than 605,000 members, which is certainly a goal we would like to achieve.

YO : Last question : what frustrates you most in your activity today, and how would you like to solve that ?

RS : When you’re involved in such a trade you’re used to obstacles. Thus we say, if there is none, then we get worried. But, let’s say that we have an attitude that allows us to see a problem as an opportunity to improve, and we want to be part of the solution, not part of the problem.

So even when we have difficulties explaining our service to public servants or to a company, we take this case as an opportunity to improve, to understand better how to present the opportunities that our system make available to all. I wouldn’t say there are reasons for frustration but only opportunities to improve.

RS : What to say ; we’d like Sardinia, which is in the middle of the Mediterranean sea, to become a point of reference in new technologies and in local currencies for the whole Mediterranean world. This would be a very beautiful thing and would enhance our physical location that we have considered as a limitation till now.